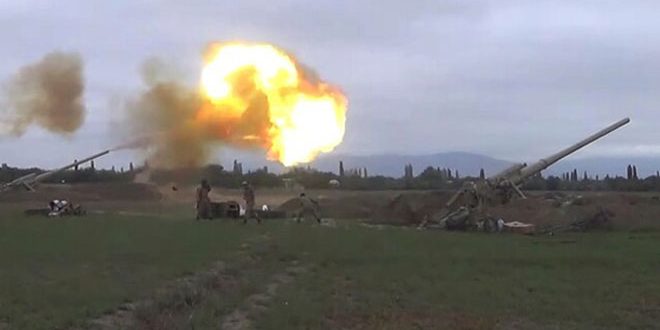 Yerevan, Baku, SANA- Armenia and Azerbaijan announced today that last night battles continued between the forces of the two countries on several axes of the line of contact in the Nagorno-Karabakh region in the framework of the military escalation between them.

The Armenian Defense Ministry was quoted by Russian Today website as saying in a statement that battles of varying intensity have continued between the two countries, indicating that the Armenian units have repelled an attack by the Azeri forces in different areas on the line of contact and inflicted heavy losses on them in the personnel and equipment in some areas.

According to the statement, the Armenian forces on Tuesday morning destroyed a number of Azeri armored vehicles on the southern axis.

In turn, a statement by the Azerbaijani Ministry of Defense stated that the Armenian forces tried to recover lost ground on the axes of Fuzuli / Cebrayil and Agdere/ Terter, but the Azerbaijani army responded to these attempts and forced them to retreat and inflicted heavy losses on their ranks.

The statement pointed out that during the night battles, a convoy of Armenian vehicles was destroyed, which was heading from Madaghiz to Aghdara, in addition to destroying an artillery battery.

The situation in the Nagorno-Karabakh region has witnessed a sudden military escalation last Sunday, while the Armenian and Azerbaijani sides exchanged accusations about the reasons for the escalation.

These developments came two months after a similar escalation in the border region between Armenia and Azerbaijan in mid-July, where the two sides exchanged accusations of causing it.