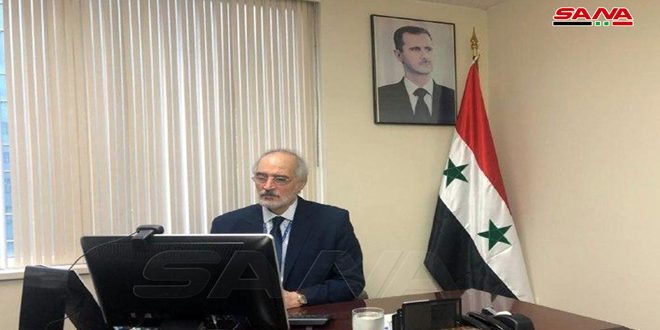 New York, SANA- Syria’s permanent representative to the UN, Bashar al-Jaafari, said that the region incidents prove what Syria has stressed about the feverish efforts of member countries at Security Council to destabilize security of states in the region in the interests of those governments and their hostile agendas.

“Erdogan’s regime has expanded  the space of its military interferences and horrible crimes in addition to its support for terrorism to exceed to other states in the area,  and this poses  threats to the international peace and security” al-Jaafari added at a session for the Security Council through video.

He added that crimes of the Turkish regime will never change the legal situation of Syrian territories it occupies , won’t they hurt Syria’s sovereignty or its legal rights.

Al-Jaafari went on to say that the US administration and the European Union continue their economic terrorism against Syria through imposing unilateral coercive measures aiming to tightening the noose around the civilians and depriving them from food, medicine and essential medical supplies along with preventing reconstruction process and the return of the displaced.

The Syrian diplomat pointed out to the Turkish regime’s renunciation of its commitments and obligations regarding Astana meetings and Sochi understanding on Idlib area as it established “the Separation wall” on parts of Syrian territories.

He added that Syria is looking forward for the participation of the states which believe in the international law and the provisions of the convention, in the international conference to be held on Nov. 11th and 12th about the Syrian displaced, in addition to their support for the Syrian state and its allies to improve the humanitarian and livelihood situation, along with facilitating the return of displaced Syrians in a dignified and safe manner to their homeland, villages and houses.

“Syria has never lingered to engage in  the political process as it openly participated in Geneva talks, Moscow consultations and Astana meetings, dealing positively with the outcomes of the Syrian National Dialogue conference in Sochi represented by forming a committee of discussing the constitution and it also took part in constructive and serious dialogue with the Special Envoy of the UN Secretary –General for Syria, Geir Pedersen,” al-Jaafari asserted.

“As Syria hopes that the committee would succeed in the mission assigned to it, it confirms that this success can’t be achieved without ensuring non- interference in its affairs in any way and by any side”, Al-Jaafari added.

Al-Jaafari referred that Pedersen visited Syria two days ago and conducted meetings with Foreign and Expatriate Minister Walid Al-Moullem and with Chairman of the committee’s national side  Ahmad al-Kazbari, adding that the Syrian side stresses the importance of success of the committee’s work which  requires respecting the procedures’ rules which have been agreed upon, including not allowing any external intervention or pressures that hinder its work, in addition to the attempts by some states to put unacceptable schedules that don’t serve the committee’s responsible work which is related to Syria’s present and future. 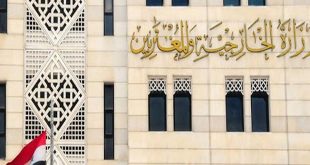