After Libya and Azerbaijan, Turkish regime prepares to send terrorists from Idleb to borders with Greece

Athens, SANA- The Greek City Times website has revealed that the Turkish regime is preparing to send its terrorist mercenaries from Idleb to the borders with Greece in light of the of the growing tension between Ankara and Athens.

The website noted that a leaked conversation between terrorists in Idleb revealed that Turkey has already started this new scheme and that the news of the possibility of war between the two parties has spread among terrorists.

The leaked conversation also showed that terrorists are ready to go to fight alongside the Turkish regime and that the deployment of mercenaries will be in the Thrace region on the borders between Turkey and Greece.

The website linked the statements of Stephanie Turco Williams, the United Nations Envoy to Libya, about foreign mercenaries leaving the Libya by land, sea and air within three months, and the Turkish efforts to deploy mercenaries on the Greek borders.

The Greek City Times indicated that the Turkish regime has used mercenaries and that it facilitated the passage of terrorists from Daesh (ISIS) and al-Qaeda on the Greek-Turkish border in the past to reach other destinations in Europe, and that this regime deploys its mercenaries and its occupying forces in the north of Cyprus, Syria and Iraq in addition to Libya, attributing that to the desire of President Recep Tayyip Erdogan’s regime of obtaining energy through aggressive actions towards its neighbors, especially with the deteriorating economy in Turkey.

The website stated that the Erdogan regime is trying to protect its terrorists in Idleb and is not ready to abandon them, which may prolong the suffering of the people there, stressing that those terrorists have become a mobile fighting force to serve the interests of the Turkish regime, whether in Syria, Libya or Azerbaijan, and now in Greece. 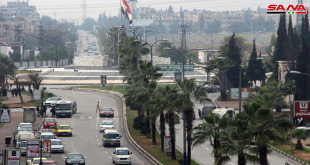 Damascus, SANA-Temperatures will remain around average as the country is affected by a low air …