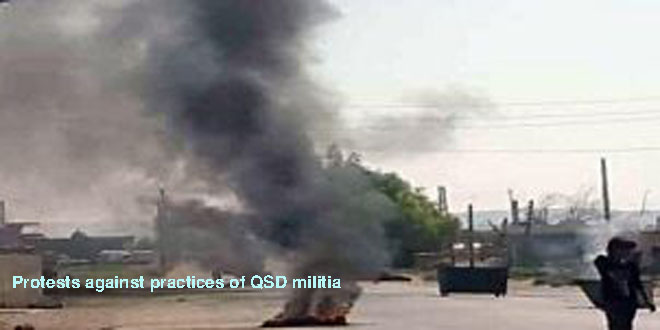 Hasaka, Raqqa, SANA- The US occupation-backed QSD militia has continued its crimes against the locals in al-Jazeera region as it has besieged al-Terwaziyeh village in Raqqa northern countryside whose locals on Sunday expelled QSD militants from their village.

Local sources in Raqqa said that militia sent military reinforcements supported by US occupation forces to the vicinity of al-Terwaziyeh village on the international highway in order to exert pressure on the locals who staged demonstrations on Sunday after two civilians were martyred as the militia opened fire on them.

The sources warned off the possibility of storming the village by QSD militia and looting the houses of the citizens who reject its presence in their village.

Meanwhile, in Hasaka countryside, armed groups from QSD militia stormed al-Houl Camp in search for those whom it calls as “wanted”, and they looted the properties of residents in the seventh part from the camp who are suffering from acute shortage of food and basic health needs which threatens of an imminent health catastrophe at the camp.

In Tal Brak countryside, armed groups from QSD militia raided several houses searching for militants who have fled from its ranks after the escalation of attacks against them recently and after the killing of tens of them by unknown persons.

Al-Jazeera region has been witnessing a campaign of raids and kidnappings by the US occupation–backed QSD militia in an attempt to intimidate the locals and force them to leave their houses to pave the way for making a demographic change in the region in the framework of the US scheme which targets Syria’s unity and territorial integrity. 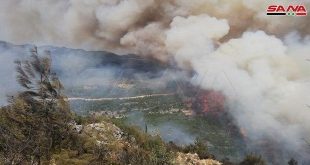 Damascus, SANA- Syria Trust for Development announced that the fundraising campaign that it had launched …