Nasrallah: Hezbollah never stored anything at Beirut port, impartial investigation must be held into disaster 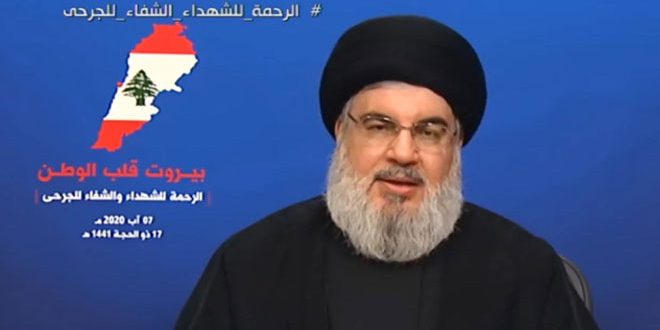 Beirut, SANA- Secretary-General of Hezbollah Sayyed Hassan Nasrallah stressed that Hezbollah with all its capabilities and resources is at the disposal of the Lebanese government and people who were affected by the explosion that hit Beirut port, rejecting categorically the claims by some Lebanese media and political forces who said that Hezbollah had weapons and ammunition at the port.

In a statement on Friday, Nasrallah pointed out that Lebanon is facing a catastrophe in every sense of the word, as Beirut port was completely destroyed and rebuilding it and the ensuing economic repercussions of this matter will exacerbate the financial and economic crisis in the county, not to mention that more than 150 martyrs have fallen in this incident, in addition to thousands of injured people, dozens of missing persons, and tens thousands of families displaced their homes.

The Secretary-General noted that since the first hour of this catastrophe, several local and Arab media outlets along with some political forces claimed that what had exploded was a store of weapons and missiles for Hezbollah, and when official sources stated that there were no weapons in the port; only ammonium nitrates used for agricultural purposes or manufacturing explosives, those forces and media outlets immediately said that it belonged to Hezbollah.

Nasrallah stressed that Hezbollah categorically denies it ever possessed anything in the port; not weapons, ammunitions, or nitrates, adding that the investigations will prove that.

He said that an impartial, fair, and transparent investigation into the Beirut port catastrophe must be conducted, adding that whoever is responsible for this incident must be prosecuted to the fullest extent of the law, and that the persons responsible must not be protected, nor can there be any cover-ups or attempts to hide facts from anyone.

2020-08-07
Baraa
Share
Previous Civilian injured in landmine blast in Hama countryside
Next Clashes erupt among Erdogan’s mercenaries, US occupation sends reinforcements to its bases and Qasad 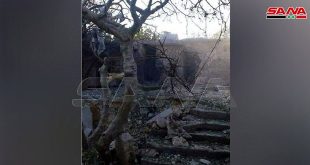