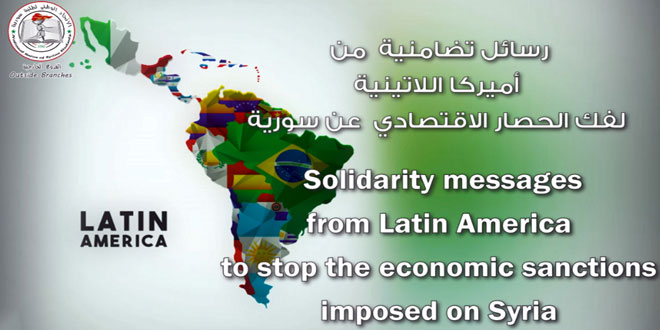 Capitals, SANA-Political and parliamentary figures from Latin America affirmed that the unilateral western coercive economic measures imposed on Syria violate international legitimacy and law, and are considered a crime against humanity, especially in light of the global coronavirus epidemic, condemning the European union’s renewal of these measures.

Senator Francisco Shahwan, chairman of the Chilean-Syrian Friendship Committee at the Chilean parliament, noted in a statement to SANA correspondent that the west which imposes on Syria those unjust coercive measures, is the one who sings the human rights but its policies and actions prove the contrary and show the fact of its colonial policies.

He pointed out that the EU renewal of the unilateral measures shows its explicit violation of human rights and subjection to American dictations, demanding the lifting of these measures immediately.

For her part, The President of the Cuban-Syrian Friendship Committee at the Cuban parliament, Lisara Liliam Olivero, condemned the unjust measures imposed on Syria, calling for its immediate lifting particularly in light of the corona epidemic that poses threat the whole world.

Meanwhile, the President of the Cuban Student Union,  José Ángel Fernández Castañeda, and the President of the Latin American News Agency( Prensa Latina) Miquel Luis Enrique, also called for lifting the unjust blockade and sanctions against Syria and its people because they violate the right of these people and undermine their ability to have food, medicines, treatments and medical devices. 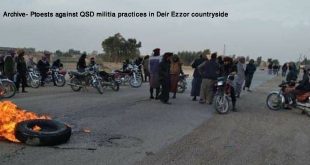 Deir Ezzor, SANA- A number of militants of the US occupation-backed QSD militia were injured …