Al-Jaafari: US and Turkish governments set fire to agrarian crops in Syria 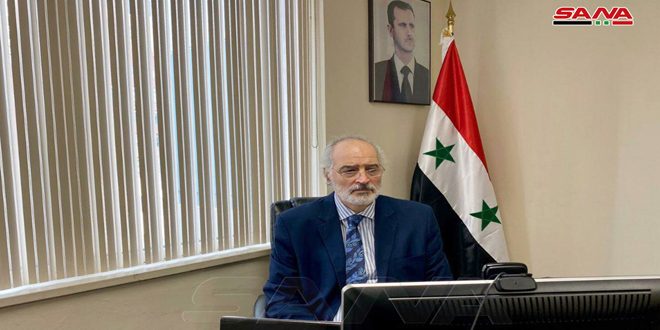 New York, SANA-Syria’s permanent representative to the UN, Dr. Bashar al-Jaafari, affirmed that the US, British, French, Turkish and Israeli governments moved from the war in proxy, based on supporting, arming and financing the terrorist and separatist groups in Syria to the direct war through launching aggression and direct military occupation, looting natural resources, and resources of Syrian energy in addition to cutting off water.

“The US and Turkish occupation forces have deliberately set fire to the agrarian crops in Syrian al-Jazeera regions in order to empty the Syrian food baskets from their resources, and this crime represents a new economic terrorism which rises up to the level of war crimes perpetrated by the occupation forces against the Syrian people,” al-Jaafari said in an official complaint submitted to the UN Secretary General and  President of Security council against the US, British, French, Turkish and Israeli entity’s governments.

Al-Jaafari added that Apache helicopters affiliated to the US occupation forces have recently dropped thermal balloons on lands with the approach of the barley and wheat crops to be harvested in a number of villages surrounding al-Shaddadi city to the south of Hasaka city, meanwhile, mercenaries of the Turkish occupation set fire to a number of wheat and barley fields in Abu Rasin and Tal tamir towns in Hasaka countryside.

He pointed out to the latest decisions issued by the US government and the EU to renew coercive measures imposed on the Syrian people in spite of international appeals to lift them in light of the spread of Coronavirus, all this synchronizing with the so-called “Caesar act” that will come into effect, clarifying that targeting the Syrian people through siege is not a new step by the US successive governments.

Al-Jaafari stressed that Syria hopes the UN and security council would take a clear stance that put an end to the US and Western interference in the political and humanitarian process tracks and adopt practical measures to end the unilateral, economic sanctions imposed on the Syrian people.

“The crimes and practices perpetrated by the governments of those states rise to the level of war crimes and constitute a violation of the rules of international law and a direct aggression on the sovereignty, safety, independence and territorial integrity of Syria,” al-Jaafari concluded.

2020-06-01
Hazem al-Sabbagh
Share
Previous Khan Asa’ad Basha, one of the greatest archeological edifices in the Orient
Next Providing medical care continued despite difficulties due to coercive measures 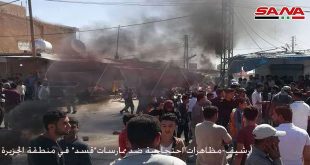 Hasaka, SANA – Qasad (SDF) groups, which are backed by US occupation forces, kidnapped a …