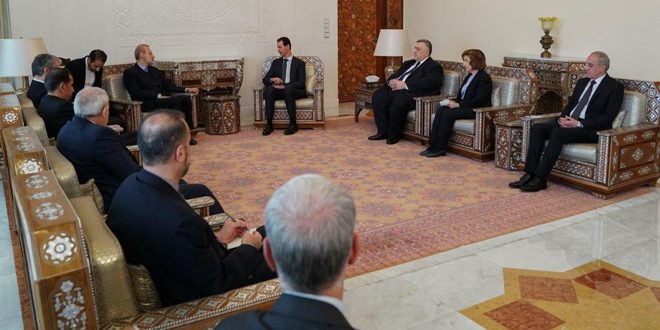 During the meeting, the successes achieved by the Syrian Arab Army and its allies in the war against terrorist organizations in Idleb and Aleppo were reviewed, and congratulations were exchanged over the recent victories against terrorism that led some Western countries, on top the United States, to escalate their hostile stances towards Syria and Iran.

President al-Assad said that countries hostile to the Syrian people are still trying to protect terrorists who take civilians as hostages and human shields, stressing that this cannot be allowed to continue at the expense of the life, security and the stability of the citizens.

He reaffirmed that the Syrian people are determined to liberate all Syrian territories from terrorism.

For his part, Larijani affirmed his country’s continued support for Syria in its efforts to eliminate terrorism on all its territories, stressing the importance of the recent victories against the terrorists.

He expressed his confidence in the ability of the Syrian people to complete the liberation of all their lands and restore Syria’s position in the region.

The meeting also discussed developments in the region and on the international arena  in light of the policy of spreading chaos and destabilization pursued by some Western countries, led by the United States.

Both sides agreed on the need for joint action to expand the circle of countries that reject these policies and cooperate with them in order  to not allow the world to be drawn into more wars.

The meeting also touched upon the strategic relations between the two countries, including the parliamentary ones, and the importance of strengthening these relations which have been proven to be essential to protect the two countries and achieve the interests of their peoples. 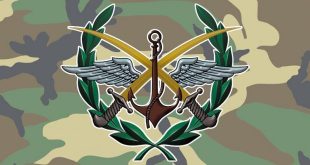 Damascus, SANA_ General Command of the Army and the Armed Forces on Sunday issued two …