Hasaka, SANA – Turkish occupation forces and their terrorist mercenaries continued their attacks on towns and villages in Tal Tamir area in Hasaka countryside.

SANA’s reporter in Hasaka said that for the second day in a row, the Turkish occupation forces and their mercenaries targeted with heavy weapons the villages of al-Qasimiya, al-Rashidyia, al-Rihaniya, and al-Azizyia in Tal Tamir northeastern countryside. 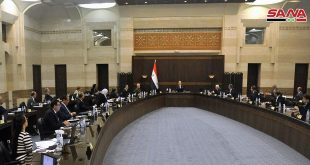 Damascus, SANA – The Cabinet on Sunday adopted a national strategy to develop the olive …