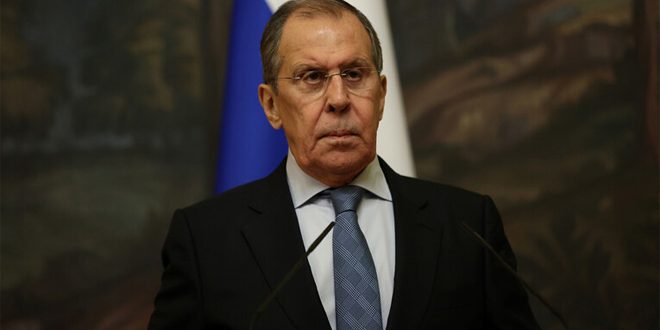 The so-called “Caesar Act” and other Western measures against Syria have mainly hurt Syrian citizens, contrary to what the West alleges, Lavrov said in an interview with Sputnik Agency on Friday.

According to the Russian Diplomat, Moscow will not stop condemning US and Western measures against Syria, clarifying that the UN considers unilateral sanctions illegal.

He emphasized the necessity of respecting sanctions imposed by the UN security council only.

” The sanctions provide for humanitarian exemptions, which include the delivery of medicines, food and other essential materials.  All this is incorrect because no supplies have been delivered from those countries that have announced the imposition of sanctions.” Lavrov said in response to statements of the western countries’ representatives on the unilateral coercive measures imposed on Syria.

Lavrov touched upon the UN Secretary-General António Guterres’ appeal, in the past few days, for stopping these measures particularly in the period of outbreak of Coronavirus pandemic.

Earlier, Syria’s permanent representative to UN, Dr. Bashar al-Jaafari affirmed, during a Security Council session via video about the humanitarian situation in Syria, that western countries that impose coercive economic measures on Syria could not be able to cover the effect of their economic terrorism against the Syrian people.