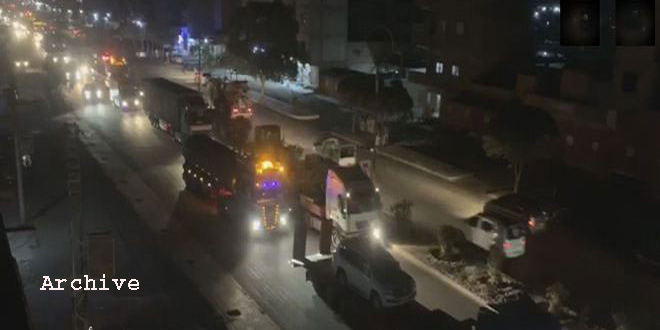 Hasaka, SANA- The US occupation forces have brought military and logistic reinforcements from Iraq to the Syrian territories through one of the illegitimate crossings in a new violation of the international laws and norms.

Local sources from al-Ya’arubyia area in Hasaka countryside told SANA reporter that the US occupation on Monday evening brought 27 trucks from the Iraqi territories through the illegitimate crossing of al-Walid into the Syrian territories that include military vehicles and closed refrigerators.

The sources indicated that the trucks headed for the illegitimate base of Qasraq Tal Baider.

Over the past months, the US occupation forces have brought thousands of the trucks laden with weapons and military and logistic equipment to Hasaka province to enhance their illegitimate presence in the Syrian al-Jazeera region and to pillage the oil and natural resources in cooperation and collusion with their tools of armed groups and terrorists whom they support in these areas.

Frankfurt, SANA – Syrian and German associations organised on Saturday a rally in the city …