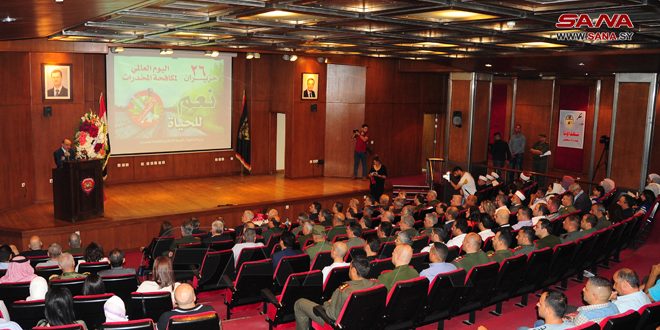 Damascus, SANA- Raising awareness of the dangers of drug use and the effective commitment of Syria to fight against this dangerous and destructive scourge of society were the axes of the national symposium organized by the Ministry of the Interior on the occasion of the International Day against Drug Abuse and Illicit Trafficking, which is marked on June 26 every year. In a speech during the symposium, Interior Minister and Chairman of the National Committee for Drug Affairs, Maj. Gen. Mohammad Khaled al-Rahmoun said that “Syria confirms, on the International Day for Drug Control, its commitment to confront this dangerous scourge and its catastrophic health, social and economic consequences on the individual and society”.

He added that Syria was and still plays an important role in supporting the efforts of the international community to combat this scourge, as it has signed all international agreements related to the illicit drug trafficking, in addition to its participation in various activities concerned with combating the phenomenon of drug trafficking.

He added that the Ministry of the Interior is facing this scourge resolutely, and the Anti-Narcotics Department and its branches in the provinces caught traffickers and smugglers and seized large amounts concealed in technically complex ways.