Mikdad discusses coordination on issues of mutual interest with Lamamra, Almarar and Guterres 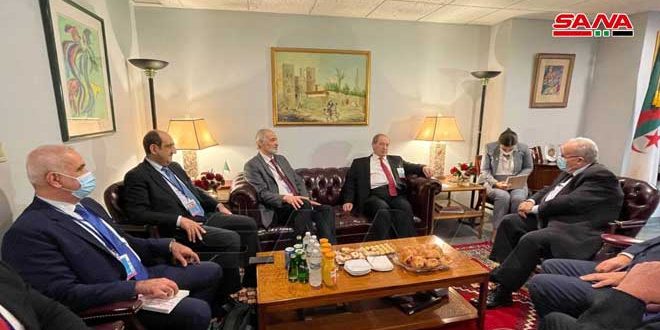 New York, SANA- Dr. Fayssal Mikdad, Foreign and Expatriates Minister, met in New York with the United Nations Secretary-General, Antonio Guterres, and expressed his satisfaction with the priorities that the latter set in his opening speech before the General Assembly, especially achieving just peace in the world, bridging the gap between the rich and poor countries, the equitable distribution of anti-Covid 19 vaccines, and confronting climate change.

The two sides discussed issues on the United Nations agenda and aspects of cooperation between the Syrian government and the United Nations, especially with regard to improving the humanitarian situation in Syria. Minister Mikdad stressed the need to focus on economic projects and early recovery, referring to the negative repercussions of the unilateral coercive measures illegitimately imposed on the Syrian people.

Mikdad called on the United Nations to shoulder its responsibilities in defending its Charter against the violations it is being exposed to, especially the violations of Syrian sovereignty by the United States in northeastern Syria and by Turkey in its northwest.

Minister Mikdad and Ramtane Lamamra, Algerian Foreign Minister, also discussed the developments of the situation in both countries and on the Arab arena and ways to enhance cooperation between them in various fields. The two ministers expressed their satisfaction with the level of the standing cooperation between the two countries, affirming their determination to continue to improve bilateral relations to achieve the aspirations of the two brotherly peoples in Syria and Algeria.

Minister Mikdad referred to the respect that Algeria enjoys at the Arab and international levels, and Syria’s confidence in the role played by Algeria in bridging the gaps between the Arab countries and restoring cohesion and solidarity among them.

In turn, Minister Lamamra reiterated Algeria’s firm position in supporting Syria to preserve its sovereignty, independence and territorial integrity and to combat terrorism in it.

Mikdad also discussed with Khalifa Shaheen Almarar, Minister of State in the United Arab Emirates, ways to develop bilateral relations between the two countries to serve the interests of the two brotherly peoples.

Minister Almarar presented the priorities that the UAE aspires to work on during its non-permanent membership at the Security Council for the period 2022-2023. Mikdad clarified Syria’s stance on the issues on the Security Council’s agenda related to Syria and the importance of coordination between the two countries in this regard.

A market for selling rural products in Damascus

Damascus, SANA- The Ministry of Agriculture and Agrarian Reform , in cooperation with the Food …