Ambassador Sabbagh: Syria has fulfilled its obligations regarding the Chemical Weapons’ Convention 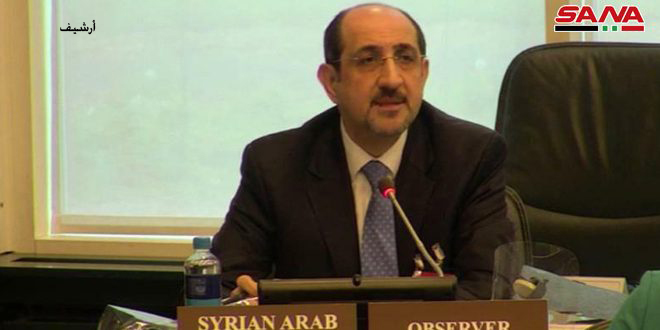 The Hague, SANA_ Syria reaffirmed that it has fulfilled all its obligations regarding the Chemical Weapons’ Convention, saying that the media campaigns of escalation and defamation carried out by the United States and its Western allies through spreading lies to distort Syria image and mislead public opinion will not affect its determination and will to go ahead in the implementation of its commitments.

Sabbagh added that Syria stresses the need for serious work to achieve the universality of the agreement and urges the Organization to intensify its efforts to call on Israel, which has not yet joined the agreement to join and ensure the establishment of an effective global system against chemical weapons, pointing out that Syria supports making the Middle East region free from weapons of mass destruction to guarantee regional security and peace.

He clarified that the repeated attacks committed by “Israel” in the Middle East region, particularly against the Syrian sovereignty, are evidence on its threat to the security and stability of the region and proof of its involvement in supporting terrorist groups and obstructing their defeat by the Syrian Arab Army.

‘Syria categorically rejects the use of chemical weapons from any party, under any circumstances and in any place, and affirms that it has never used any chemical materials as weapons in any Syrian village or city and that it no longer possesses any chemical weapons since its elimination in 2014,” Sabbagh added.