Homs, SANA- The outdoor cinema event held by the General Organization for Cinema over the course of three days in the park opposite to Al-Kindi Cinema in Homs concluded activities with the long-running feature Syrian film (Maward).

The film is taken from the novel “When the bell rings” by the author Mahmoud Abdel Wahid, screenplay and dialogue by Samer Muhammad Ismail and directed by Ahmed Ibrahim Ahmed, it was screened for the first time in 2017 and tells the story of a village that grows damask rose and is exposed to the crimes of terrorist organizations that affect people and flower, restoring the social changes that have taken place in Syria since the 1950s.

A number of the audience who attended the event talked about the importance of the outdoor cinema event. Teacher Muhammad Sulieman, Faten al-Saad and Nabila Hamoud said that it moved the cinema to the public places spontaneously and this availed the opportunity for the citizens to see these important Syrian films.

The General Organization for Cinema had shown during the event the films of Damascus- Aleppo and the Lover. 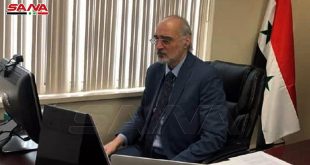