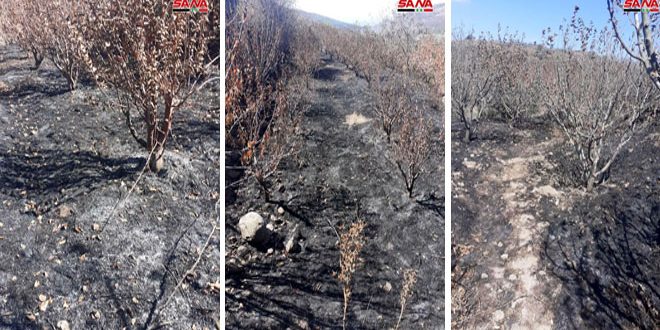 Homs, SANA – In Qurb Ali village in western countryside of Homs province, the families have  embodied all meanings of cooperation and determination to exceed the fire catastrophe through helping the firefighting teams extinguish fires which erupted recently and extended to  wide areas of agricultural and forestry lands and properties of the locals.

The families affirmed that they will re-plant their lands that have been damaged by fires in order to returning life to it.

Ruggedness of the area and the difficulty of accessing it contributed to delay the extinguishing operations according to Hassan Abdo Suleiman, one of the village locals who told SANA reporter that the firefighting teams and civil defense in cooperation with people have exerted double efforts at around the clock to extinguish fires and limit  them.

Suleiman noted that he lost about dozens of dunums of walnut, cherry, apples and olive trees where the fires destroyed them completely until the roots, but that didn’t make him stop to return life to the land and newly cultivating them even if that took several years. 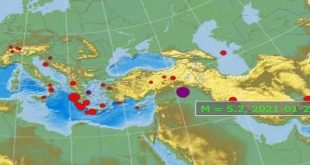 Damascus, SANA-An earthquake measuring 5.2 on Richter scale and at a depth of 10 km …