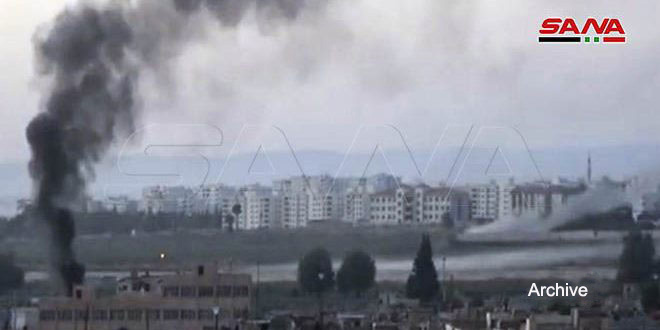 Raqqa, SANA –Turkish occupation forces and their mercenaries of terrorist organizations renewed on Friday their attacks on villages and towns surrounded the areas which they occupy in Raqqa countryside, attacked with missiles and artillery on Ayn Issa region, led to martyrdom of one child and caused material damage.

Civil sources told SANA reporter that Turkish occupation forces and terrorist organizations operating under their command positioned in the occupied neighboring villages, attacked with missiles and artillery the houses of villages of al-Khalideya and Abu Srah in the vicinity of Ayn Issa town which led to martyrdom of one child and caused material damage in several houses and agricultural lands.

2020-10-16
hybah
Share
Previous Fields of Lattakia today…cultivation of corn in Demrsakho town on the outskirts of Lattakia city
Next Al-Jaafari: Syria calls for making the Middle East a region free from Weapons of Mass destruction