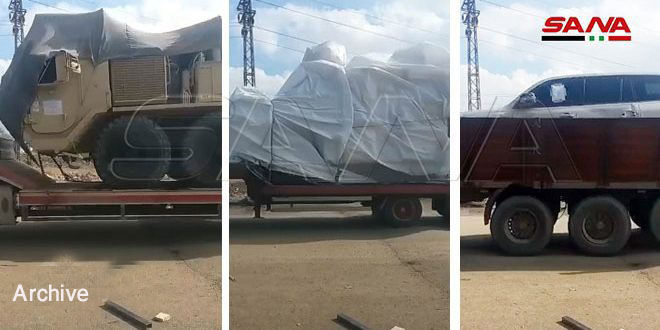 Hasaka, SANA-The US occupation forces brought in 20 vehicles laden with military and logistic equipment to its illegal bases in Hasaka countryside.

Civil sources told SANA reporter in al- Suwaidia village that the US occupation brought in a convoy of /20/ vehicles including trucks, refrigerators and tankers with a number of armored military vehicles of Hammer type across Al-Walid illegal crossing to Al-Javal airport in al-Yarubiyah in the eastern countryside of Hasaka.

The US occupation forces have brought in hundreds of Trucks loaded with weapons and military and logistic equipment to Hasaka across the illegal crossings to reinforce their illegitimate presence in Syrian al- Jazeera region and to steal the Syrian oil and the resources with the help of “QSD” militia.

Tartous/ Lattakia/ Homs, SANA- The firefighter brigades in the Forestry Departments of the Agriculture Directorates …