Al-Moallem to Grandi: Importance of permanent coordination with Syrian national bodies to enhance delivery of aid, implementation of projects that serve the citizens 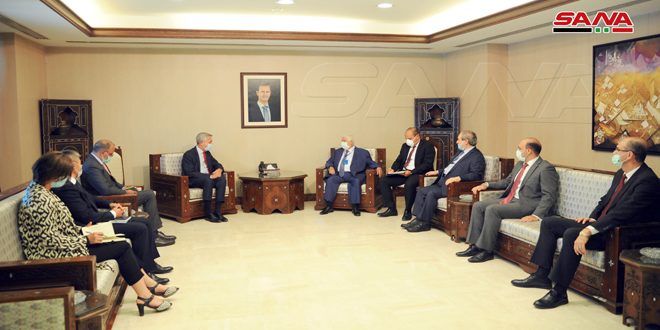 The two sides discussed the UN High Commission’s various activities in the Syrian Arab Republic, and means of enhancing cooperation and coordination between it and Syria in a way that guarantees the delivery of the humanitarian aid to the needy and providing the possible support to the Syrian citizens in facing the humanitarian and economic repercussions they are facing. Al-Moallem underlined the importance that the Commission and all organizations operating in Syria to permanently coordinate with the Syrian national bodies to guarantee unifying their efforts, enhancing the delivery of aid and carrying out the projects which support the citizens in facing the repercussions of the terrorist war and the unilateral coercive measures imposed on the Syrian people.

He pointed out the importance that the international organizations strengthen their efforts in highlighting and uncovering the negative impacts of these measures on securing the livelihood of the Syrian people and their requirements to face the coronavirus, as well as their negative effect on hindering the return of the displaced Syrians to their homeland after the Syrian State has restored security and safety to most of the Syrian territories.

Grandi, in turn, briefed in the Syrian side on the Commission’s works in Syria and the projects that are currently implemented all over the Syrian territories in cooperation with the Syrian government, asserting the importance of doubling the efforts for increasing the numbers of refugees returning to their cities and areas.

Grandi thanked the Syrian Government for the support and facilitations it provides to the work of the commission in Syria, expressing its readiness for permanent coordination with the Syrian government in a way that gives those project a success and guarantees their implementation in best way far from politicization. Earlier, Deputy Foreign and Expatriates Minister Fayssal Mikdad discussed with Grandi and the accompanying the joint bilateral relations, asserting that the Syrian government continues its efforts to facilitate the return of the Syrian refugees to the motherland and exerts all efforts to ensure possible circumstances for their return to their homes and villages in cooperation with the Commission despite all the difficulties resulted from imposing the unilateral coercive measures and the western political pressures which aim at exploiting the Syrian refugees paper to achieve agendas far from humanitarian goals.

Mikdad hailed the latest joint achievements which the Syrian government and the Refugees Commission have attained through the return of the Syrian refugees stranded on the Syrian-Lebanese borders.

He stressed the Commission’s adherence to its humanitarian goals and keenness to get away from any political agenda.

Raqqa, SANA- Within the framework of the attacks that target the US occupation forces-backed QSD …