Occupied Jerusalem, SANA- The Israeli occupation warplanes renewed at dawn on Friday their aggression against the besieged Gaza Strip.

Ma’an News Agency reported that the Israeli warplanes launched a series of missile targeting the agricultural lands in Gaza City in the middle of the Strip and east of Rafah in the south, causing a material damage to the infrastructure and the Palestinians’ properties.

Since two weeks ago, the Israeli occupation has been escalating its aggression on the besieged Gaza Strip, and it has shelled different areas there by warplanes and artillery as a number of Palestinians have been injured, in addition to causing a huge damage to the infrastructure. 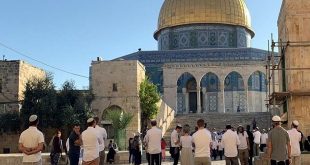 Occupied Jerusalem, SANA-Tens of Israeli settlers on Wednesday stormed into al-Aqsa Mosque once again under …