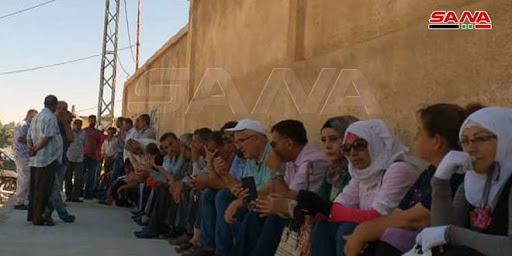 Hasaka, SANA- US occupation-backed QSD militias threatened the workers of Hasaka Electricity Company to use weapons and kidnap them to force them to end their sit-in near the Company, after they have imposed a curfew in the areas controlled by them.

A source at the Company told SANA in a statement that QSD militias have brought in a number of gunmen to the company’s building and threatened the workers directly to shoot them and kidnap them in case they continue their sit-in in front of the Company.

The source added that that QSD militias stole in the past period the office supplies and the furniture of the company headquarters and built an external fence and changed the main entrance of the company.

The source added that these violations aim at hindering the services provided to the citizens and serving the agendas of the US occupation forces that are illegitimately existed in the area.

In 27th last June, QSD militias seized by force the General Electricity Company building in Hasaka in al-Nashwa neighborhood, the building of the Syrian Grain Corporation in Ghweiran neighborhood, the sport city, parts of the youths building, the Syrian Society for Informatics, the directorate of industry, tourism and environmental affairs, and many other facilities and expelled their workers.