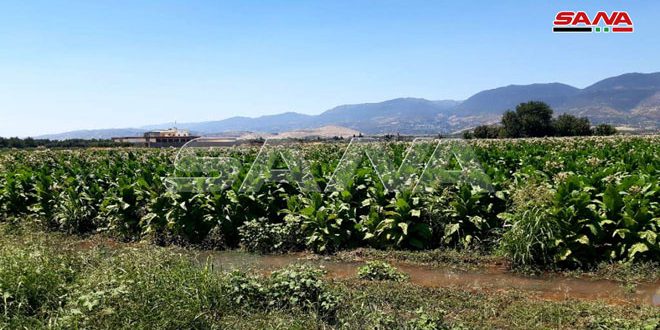 Hama, SANA- The cultivation of tobacco crop in al-Ghab area in Hama countryside has witnessed during the last few years a significant expansion as tobacco is considered as one of the financially feasible crops, where the farmers exploit it to improve their livelihood and as a source to improve the living of their families.

In a statement to SANA, the farmers of tobacco in al-Ghab area underlined the economic value ensured by the cultivation of tobacco for the locals in al-Ghab area, as well as its contribution to the GDP in general, calling on the concerned authorities to provide further support to tobacco cultivation, through providing fertilizers, agricultural medicines and fuel in a way that contribute to reducing the costs of agricultural production. Director of Agriculture and Scientific Research at General Establishment of Tobacco (GEOT) Ayman Qara Falah told SANA that the GEOT will continue to provide all kinds of support to the farmers in a way that contribute to achieving the highest level of productivity and increasing the financial revenues.

The farmers also described the cultivation of tobacco as promising and significant as it has become a strategic alternative of the traditional crops, asserting that it will be a productive and economic lever for al-Ghab area and the farmers.