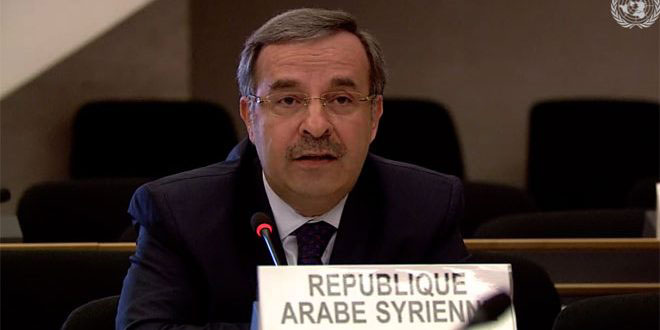 Geneva, SANA- Syria’s Permanent Representative to the UN Office and other international organizations in Geneva, Ambassador Hussam Eddin Ala affirmed that the escalation in the use of drones by the US, the Israeli occupation entity and the Turkish regime for launching military acts of aggression and practicing state terrorism came as a result of the silence of the Security Council and its failure to stop these acts which threaten the international peace and security and violate the rules of the international law and the UN Charter.

During a session for the Human Rights Council in Geneva on Thursday, Ambassador Ala said that the explanations promoted by these countries to justify their crimes whether under the pretext of combating terrorism, or under the pretext of article /51/ of the UN Charter are just heresies that contradict with the principles of respecting the sovereignty of the states and the prohibition of the use of force in the international relations, and we should be aware of the attempts to legitimize them.

He pointed out that the report of the Special Rapporteur on that terrorist organizations linked to Daesh (ISIS) and Jabhat al-Nusra have obtained the technologies of drones, and they use them in Syria is evidence on the rate of support provided to these organizations in a violation of the provisions of the Charter that prohibit states from providing support to armed gangs who commit terrorist acts.

Ambassador Ala said that the assassination of Leader of Quds Force Lieutenant General Qassem Soleimani, who had played a key role in combating terrorism, with a US drone is a state terrorism whose danger goes far beyond describing it as a targeted killing or the attempt to justify it with excuses that are not built on any legal basis.

Damascus, SANA-Health Ministry announced on Tuesday that 72 new coronavirus infections were registered, while one …