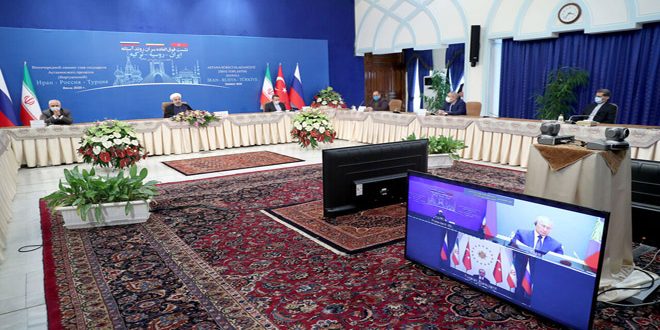 Russian President, Vladimir Putin, Iranian President, Hassan Rouhani and President of the Turkish regime, Recep Tayyip Erdogan affirmed in a statement concluding their summit via video conference their strong adherence to the independence and territorial integrity of the Syrian Arab Republic and to the UN principles.

They discussed in details the situation in the de-escalation zone of Idleb, stressing the need for the full implementation of all agreements signed in this domain, in addition to the situation in the north-eastern part of Syria, expressing denunciation of the illegal dominance and transferring the incomes of oil that should return to the Syrian state.

The three presidents stressed that there is no military solution to the crisis in Syria, adding that the solution will be through a political process led by the Syrians themselves with the help of the United Nations in accordance with Security Council Resolution No. 2254.

In this regard, they stressed the need for urgent guarantee, without any obstacles, to the delivery of humanitarian aid to all Syrian territories to ease the suffering of the Syrian people, calling upon the international community, especially the United Nations, and its humanitarian agencies to increase the volume of assistance provided by them to all Syrians without any discrimination, politicization and preconditions.

The three presidents indicated to the necessity of working to facilitate the return of the displaced citizens to their areas of residence in Syria, urging the international community to provide suitable support for the refugees in housing, returning to normal life as well as enhancing the international community’s share to increase aids to Syria through implementing reconstruction projects  including infrastructure  such as water and electricity  , schools and hospitals  as well as dismantling mines.

They stressed the need to respect the internationally- recognized resolutions, including those related to the occupied Syrian Golan, on top, Security Council Resolution No. 497.

The statement condemned the US proclamation on the occupied Syrian Golan, which constitutes a flagrant violation of the international law and poses threat to regional peace and security, stressing that the Israeli aggressions on Syria violate its sovereignty and   escalate tension  in the region.

Damascus, SANA-Health Ministry announced on Monday that 67 new coronavirus cases were registered in the …