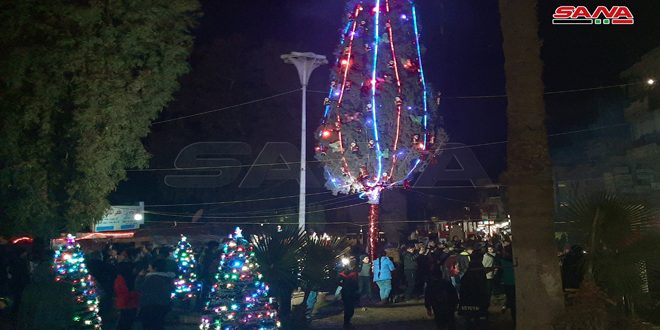 Hasaka, SANA- Official and popular activities have participated in lighting up a Christmas tree at Hasaka city center, wishing that security and stability will return to all the Syrian territories and that the army will triumph over terrorism.

Chairman of Hasaka City Council Adnan Khajou, in a statement to SANA reporter, noted that lighting the tree comes in expression of happiness and in an attempt to spread it across the city.

“We want to convey a message to the world that the Syrian people love the life and they are able to make it despite of all the harsh circumstances,” Khajou said, wishing that the coming year will be a year of victory, reconstruction and security.

Mor Maurice Amsih, Archbishop of Jazeera and Euphrates for Syriac Orthodox in Hasaka, said “We hope that the next year will be a year of amity and peace for all the Syrian people thanks to the sacrifices of the Syrian Arab Army and the wisdom of the leadership.”

He expressed confidence that all foreign forces which have entered Syria illegitimately will be eradicated.

Participants in the event said that lighting the Christmas tree in Hasaka and in all the Syrian provinces proves that the Syrians are able to build the life and they don’t know the meaning of defeat.

They expressed hope that the new year will be full of victories on all the Syrian territories. 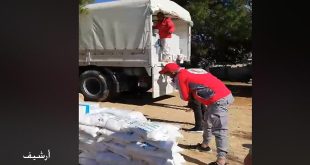 A New batch of aid distributed in three villages, towns in Daraa countryside