Armenian Catholic Cathedral of Our Mother of Reliefs reopened in Aleppo 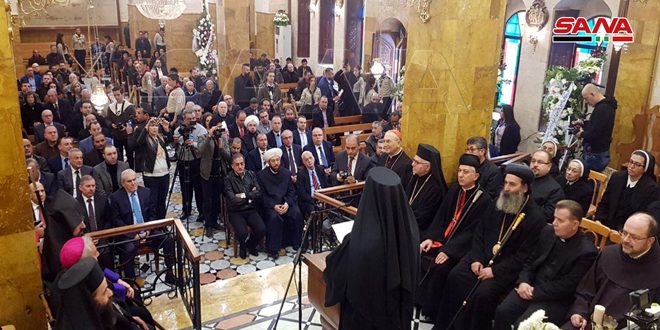 Aleppo, SANA_ The Armenian Catholic Cathedral of Our Mother of Reliefs was reopened on Saturday in al-Telal neighborhood in the old city of Aleppo after restoration and renovation works to fix the damage caused to the cathedral by terrorism had been completed.

The opening ceremony was attended by Syria’s Grand Mufti Ahmad Badreddin Hassoun, the Papal Ambassador to Syria Mario Zenari, Aleppo Mufti Mahmoud Akkam in addition to a crowd of Muslim and Christian clergymen.

Head of the Armenian Catholic Community in Aleppo Archbishop Boutrus Mrayati stressed the importance of celebrating the reopening of the cathedral, which was built in 1840, as a spiritual occasion that aims at preserving Syria’s history, pointing out that renovation works were carried out by national expertise.

The Grand Mufti Badreddin Hassoun said that reopening the cathedral is a message to the world that “we are rebuilding what terrorism had destroyed of churches, mosques and factories.”

He stressed that terrorism tools have destroyed the churches and mosques but they won’t be able to destroy Syria.

Other speeches hailed the reopening of the cathedral, emphasizing that it indicates the Christians’ insistence to stay in Syria and contribute to rebuilding what the terrorist war has destroyed.

Authorities seize large amounts of weapons left behind by terrorists in southern region, including US, Israeli-made mines

Damascus, SANA- The competent authorities on Wednesday seized a large amount of weapons left behind …