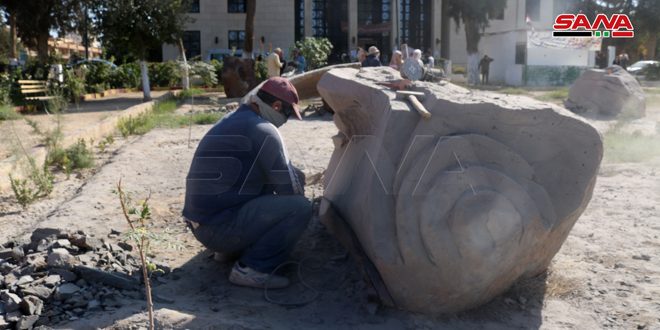 Prominent fine artists and sculptors from different Syrian provinces are taking part in the 20-day forum to confirm Syria’s victory and stress the Syrians’ steadfastness and determination to rebuild their country on right bases.

Member of the executive Bureau of Deir Ezzor Governorate Siham al-Khater said: “The forum is the first of its kind in this province. 12 sculptors from all over Syria are to produce 10 basalt sculptures talking Syria’s victory over terrorism, particularly in Deir Ezzor, and depicting the country’s heritage, nature and history.”

These artworks are to be distributed and exhibited at the governorate’s squares and roundabouts, al-Khater added,

She pointed out that concerned parties in the governorate have ensured all requirements necessary to make the forum a success, including the rocks and sculpture-related equipment.

Director of the forum Mohammad Joudeyeh said that Deir Ezzor city has been chosen as the place for holding this event to celebrate the city’s being free of terrorism and to bring back the smile for the locals who suffered a lot from terrorism and experienced very difficult humanitarian conditions under the terrorists’ siege.

He added that the event is an opportunity for artists from different provinces to exchange expertise and achieve one goal, represented in producing major artworks that tell the story of Syria’s victory and maintain the region’s heritage and traditions.

The basalt artworks, according to Joudeyeh, are scheduled to be implemented at public parks.

He said that a 12 meter high sculpture are to be produced in honor of the martyrs who sacrificed in defense of the homeland.

Deir Ezzor city, which had experienced a brutal terrorist siege by Daesh terrorist organization for more than three years before it was liberated by the Syrian Arab army , is now gradually recovering and celebrating victory in different aspects of life, including culture.