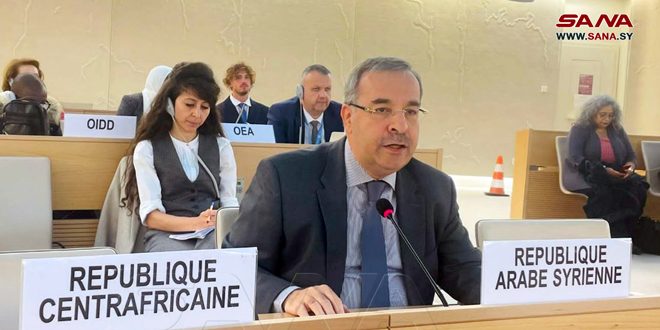 Geneva, SANA- Syria’s Permanent Representative to the United Nations and International Organizations in Geneva, Ambassador Hussam Edin Aala, affirmed that the acts of aggression by “Israel” in Palestine and Syria have become a consistent method of reckless behavior violating international law and pushing the region to an unprecedented state of tension and confrontation.

“The repeated Israeli attacks on Syrian lands, and their deliberate targeting of civic facilities, including ports and airports, constitute violation of the international law and war crimes that expose the lives of Syrians to risk and threaten the safety of civil aviation in Syria and the region, not to mention endangering the work of humanitarian agencies that use these airports and seaports to deliver humanitarian aid, as well as the regional and international peace and security”, Aala said in a statement during Friday session of the Human Rights Council (HRC) on human rights situation in Palestine and other occupied Arab territories.

Aala went on to say :”In light of the policy of silence, and the double standards that control the attitudes of Western states that favor “Israel”, the occupying power continues to commit massacres and crimes against the Palestinian people, violate their basic rights, subject Palestinians to collective punishment through the stifling blockade in gaza, and demolishing houses, confiscation of property in occupied al-Quds, closing entire areas in the West Bank, imposing restrictions on the movement of its residents, in addition to arbitrary arrest, torture of prisoners in occupation prisons, forced displacement, and depriving Palestinians of freely practicing their religious rites”.

The martyrdom of the seven-year-old Palestinian child Rayan Suleiman on Thursday, after he had been chased by the Israeli occupation forces near his school, while his father was prevented from rushing him to hospital , is a reminder of the Israeli occupation’s crimes for which it must be held accountable, Aala noted.

“Syria affirms that its right to restore the occupied Syrian Golan is an inalienable right guaranteed by international laws, UN resolutions, and the will of the Syrians to fully recover their occupied land”, Ambassador Aala asserted.

“Syrians renew their categorical rejection of the measures taken by the Israeli occupation entity to perpetuate its occupation of the Syrian Golan, and call on all countries not to recognize these unilateral measures as they are null, void and without international legal effect.”

The Ambassador underlined “Syria also reiterates its firm support for the Palestinian people right to establish their independent and sovereign state, with Jerusalem as its capital, and to guarantee the refugees’ right of return in implementation of relevant UN resolutions, in addition to its support for the liberation of the remaining occupied Lebanese lands.”

Aala thanked the states participating in this meeting, which affirmed their adherence to the seventh item on the agenda of this session ,as an essential part of the Council’s institution-building package. And he condemned the attempts of the U.S. to undermine this item,saying “Those attempts confirm U.S. double standards in dealing with the human rights situation within the HRC as well as its encouragement of Israeli occupation practices”. 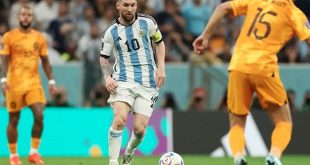