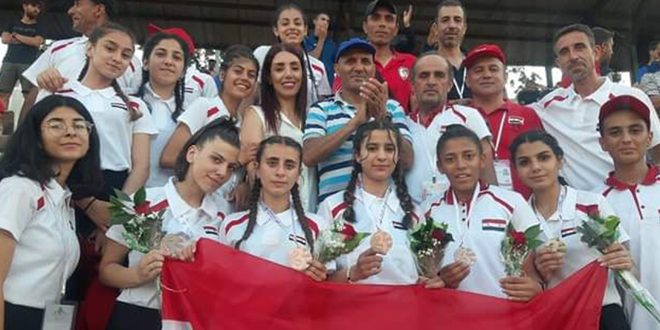 Beirut, SANA- The Syrian national athletics team added new medals to its tally in the West Asian Youth Athletics Championship for Men and Women held in the Lebanese capital, Beirut. During today’s competition, Aya al- Rhayiah gained a gold medal in the 400-meter hurdles, while Sally Hamada, won a silver medal in the high jump, Haneen al-Hassan, obtained a silver in the 3000-meter steeplechase, Shahd Al-Ali, a silver in discus throw, Osama al-Ali a bronze in pole vault, and the Syrian national team achieved a bronze in the women’s relay in the 400-meter team relay.

The aforementioned medals are added to the medals harvested by the Syrian team during the past two days in the tournament, where Naya Abbas won the gold in the 800m race yesterday, Elissar Youssef won the gold in the 100m hurdles, Ramya Shaaban and Sidra Shihada Shaaban won a gold and a silver in the 5000m walk and Aya Rhayiah a gold in the 400m hurdles and Aya Esber a silver in the javelin throwing competition, and a gold and a silver medals were gained through players Saddam al-Names and Youssef Olabi in the 10 km walking race.